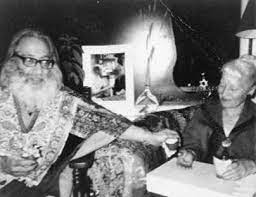 The amanuensis, Frida Waterhouse, was born of Jewish parents on October 12, 1907, at Gloversville, New York. She has a sister who is still living. The year 1907 was a prelude to an economic depression in the United States, and there was barely enough food in the house for the two children. Ultimately both parents became quite ill, which meant a separation of the family unit for a period of time.

In fact, there were two separations. The first took place when the writer was about three years old; the second within the next year and one-half. These events so traumatized her that to this day they are not entirely clear. However, they either did not affect her sister or else the writer was subjected to experiences during brief absences from her sister.

The better part of two years was spent in Denver, Colorado, both with her parents and in an institution while her mother was hospitalized for surgery. Shortly before the writer was five, the family moved to Los Angeles, California, where she spent most of her life. Her family was politically oriented and from the age of nine she was involved with the Young Peoples’ Socialist League. At nineteen she left the organization, but (perhaps as a consequence was imbued with the desire to serve humanity by changing existing conditions. She was a rebel who would not conform to her peers. Her family was anti-religious. The accent was on good conversation, music and books, and especially on discussions of the important events of the times.

She was married twice. One was a common-law marriage which lasted about five years. The second marriage was legal which endured the better part of thirteen years.  Endured is an appropriate description because the love was mostly one-sided and her husband wanted “out.” The breaking up of this marriage was the greatest single factor to move her towards her spiritual goals. In her anguish she opened up to her first spiritual awakening of this lifetime – an illumination that brought the presence of the Divine into her life. This was the first of several major soul-changing experiences that were buttressed by others of lesser impact.

She moved from Los Angeles to San Francisco under spiritual guidance in July, 1963. In February, 1966, she returned to Los Angeles to be present when her mother left the body. Then in March, 1967, she moved back to San Francisco to prepare for her spiritual work. This time she was permitted to put her roots down. A part of her genetic inheritance developed into cataracts in both eyes. Eventually she became blind to all but light and darkness because she would not submit to surgery for a period of about four and one-half years. This was requested by the Divine Ones in order that she might develop more inner sensitivities. Once she became an instrument with the skills required for her special work, her eyes developed acute glaucoma and surgery became imperative. Her sight was successfully restored.

Her work is primarily to provide a practical springboard that others can use to help them work through compulsive, reactive emotional patterns that can lead to mastery over themselves. She is a channel that invokes spiritual force fields in order to confirm data already received by others. Also, she can furnish data confirming the soul’s path for this lifetime. In other words, she is guided by her High Self (Divine Mind) when counseling and is moved into areas of Superconscious Mind when invoking higher spiritual force fields. She has proved by her spiritual growth and increased sensitivity as a channel that the ideas for self-help in this book are not theory, but can give valid results.